An overview of the development of the aerospace industry in Québec

Human beings have always wanted to fly. Quebecers are no exception. For more than a century, our aerospace industry has grown and Montréal is now the third largest aerospace centre in the world. Here, in a few snippets, is this remarkable story.

The first embryo of Montréal's aerospace industry emerged in 1903 with the founding of Canadian Marconi. This company went on to develop in the aerospace sector and in 2001 became Esterline CMC Electronics. It was not until 1907 that Montréal’s Laurence J. Lesh made the first gliding flights in Canada. Mr. Lesh used a glider towed by horses or cars.

The development of commercial aviation activities took a while to emerge in Canada. The first commercial flight finally took place from Lac-à-la-Tortue. On board La Vigilance, Stuart Graham conducted surveillance flights for forest fires.  His wife, Madge Graham, became the first Canadian woman to participate in flight when she accompanied him between Nova Scotia and Québec. In 1922, they inspired  Laurentide Air Service, which began operations in Abitibi. In 1924, it established the first scheduled air service in Québec, connecting Angliers to Rouyn in Abitibi. 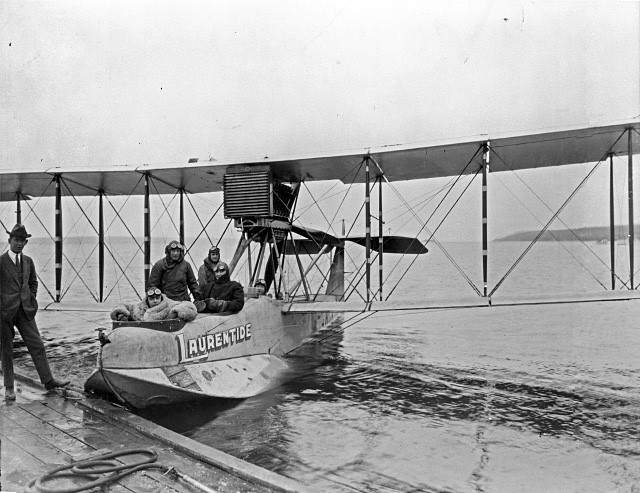 During the 1920s, commercial aviation continued to make progress with the opening of Saint-Hubert Airport in 1927. It is the oldest Canadian airport to remain  in  continuous service. “A 205-foot (62.5 m) mooring mast was built specifically to accommodate these airships. In August 1930, the R-100 made a 13 day visit to the country. Local flights to Ottawa and Toronto took place. During this period, more than 600,000 visitors came out to take a look at the airship.”1

In 1928, another important chapter in Montréal’s aerospace history began with the founding of Pratt & Whitney Canada. At the time, the company, founded by James Young, carried out repairs and maintenance on Wasp engines.

In 1936, the first technological and commercial success of the Canadian aerospace industry arrived on the market. That year, Noordyun delivered its first Norseman to Dominion Skyways Limited in Rouyn. The Norseman was the first true bush aircraft and provided access to Canada’s North. More than 900 Norseman aircraft have been delivered worldwide. 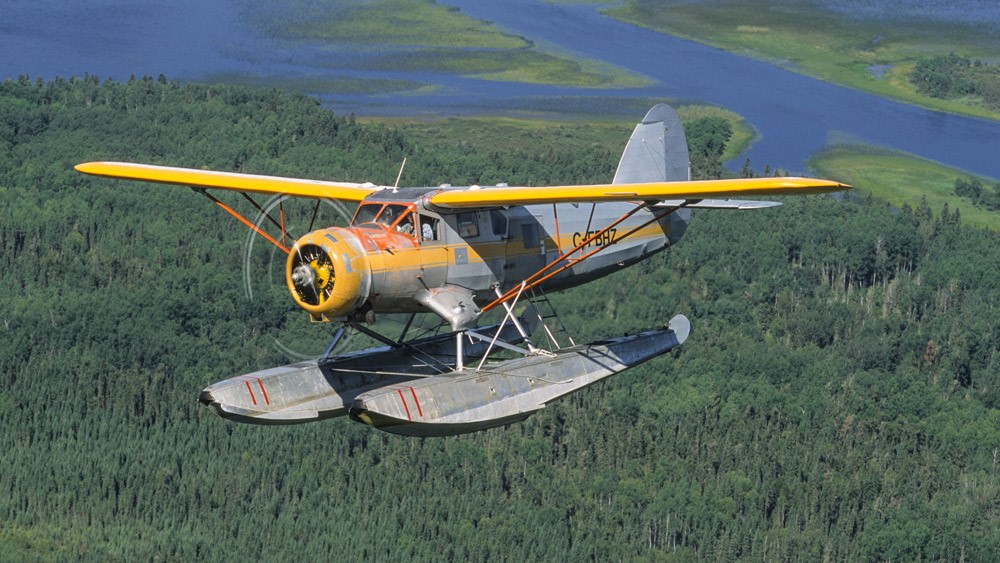 Air Canada began its air operations in 1937 under the name Trans-Canada Airways. Headquartered in Montréal, it is Canada’s largest airline with more than 30,000 employees. 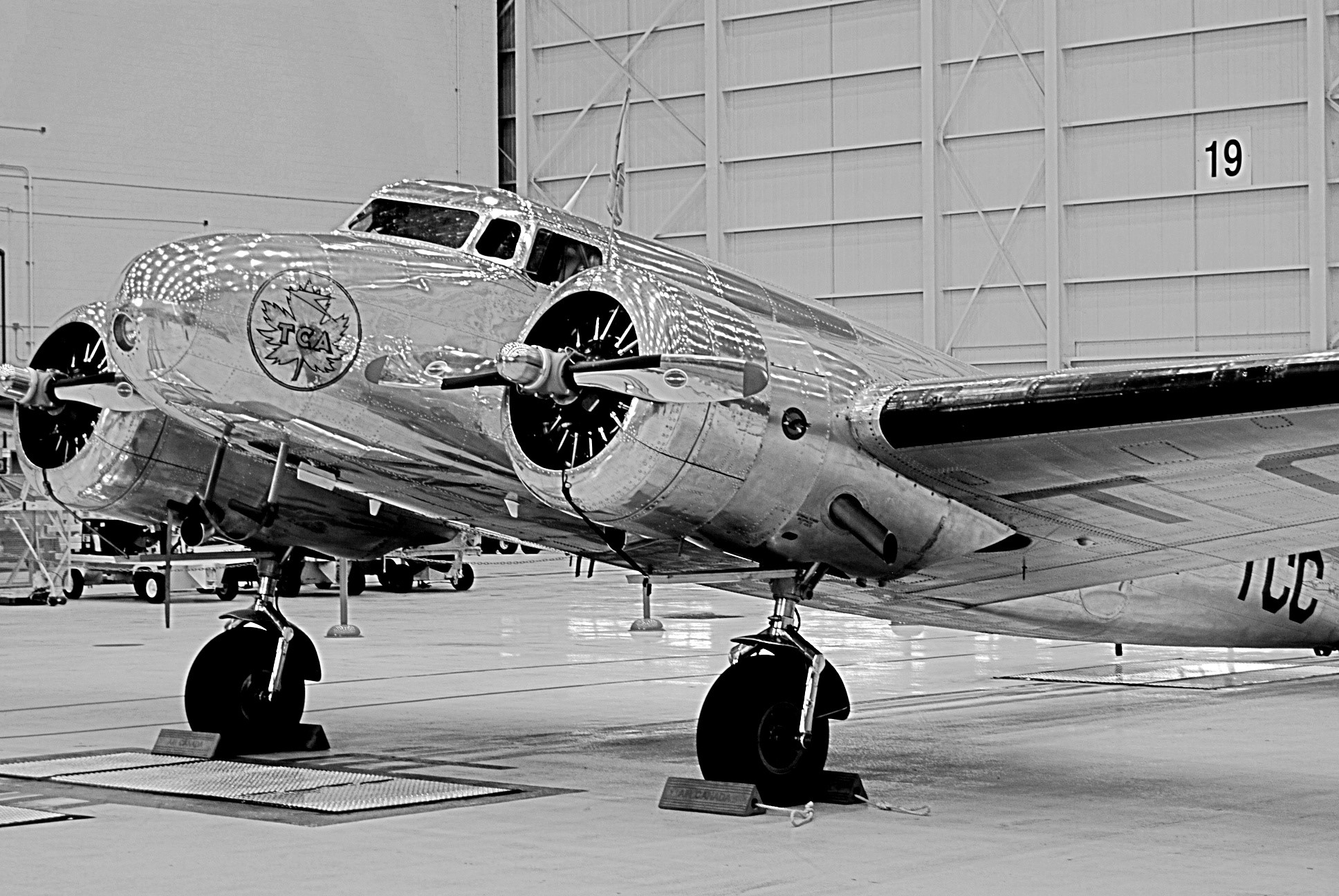 When Dorval Airport opened in 1941, it was first used to ferry air crews to Europe. But soon after the war, it became Air Canada’s first major base. The international character of Dorval was confirmed in 1949 with the establishment of the Montréal-Amsterdam link by KLM. It is one of the oldest transatlantic routes.

Immediately after the war, the growth of Québec’s air transportation industry accelerated. In 1946, the Golf aviation syndicate and Air Rimouski were founded. Six years later, the two companies merged to create Québecair.

Héroux, now Héroux-Devtek, at its founding in 1942

1947 marked another important chapter in our aerospace history with the founding of Canadian Aviation Electronics (CAE) by Laurent Thériault and Kenneth Patrick. While the company initially worked on the repair of avionics equipment, during the 1960s it began manufacturing flight simulators. Today, CAE is the world’s largest flight simulator manufacturer and holds more than  80% of the market.

Starting in the 1960s, Montréal’s aerospace industry began to mature and brought major innovations which led to numerous commercial successes.

In 1961, Pratt & Whitney Canada launched testing of the PT6 engine. With its free drive shaft and air intake at the rear rather than the front, the PT6 revolutionized the gas turbine engine world. It has been improved several times and it is still in production. Its annual sales still outpace those of the competition almost 60 years later. Its low operating cost has contributed significantly to the development of general aviation and helicopters, in particular. With more than 51,000 units delivered, it is the best-selling engine in the history of aerospace.

Contrary to what’s written in the history books, it was a Québec “foot” that first stepped on the lunar surface. This foot was on the lunar module of the Apollo 11 mission. It was manufactured by Héroux-Devtek in Longueuil, a suburb of Montréal. This success was certainly a great step for humanity, but also for the Montréal aerospace industry. 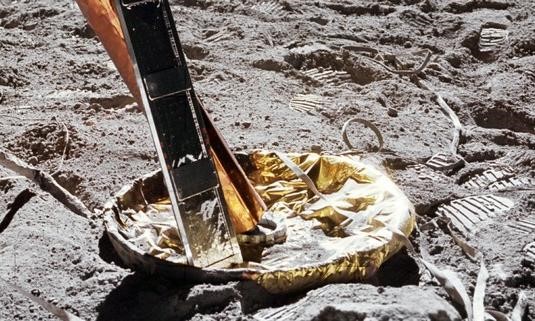 Canadair: The Birth of a Great Canadian Pride

For its part, Canadair achieved an important milestone in its history with the delivery of the first CL215 water bomber to the French civil security forces. The Europeans went on to adopt this air firefighter, which was nicknamed the Canadair, and it became an icon of the Québec aerospace industry.

The origins of Canadair can be traced back to Vickers Ltd., founded in 1923 and purchased by Canadians in 1927. Canadair produced more than 4,000 aircraft, mostly military aircraft. The reputation of the Canadair CL215 and CL415     flying boat amphibious aircraft is well established. Water bombers are particularly effective in fighting forest fires. They are used all over the world and are the pride of Canadians.

Canadair also established another important brand with the first flight of the Challenger 600 in the fall of 1978. More than 40 years after this historic flight, the Challenger is still in production and is the only business aircraft to have sold more than 1,000 units. The Challenger is the very definition of innovation, quality and refinement. 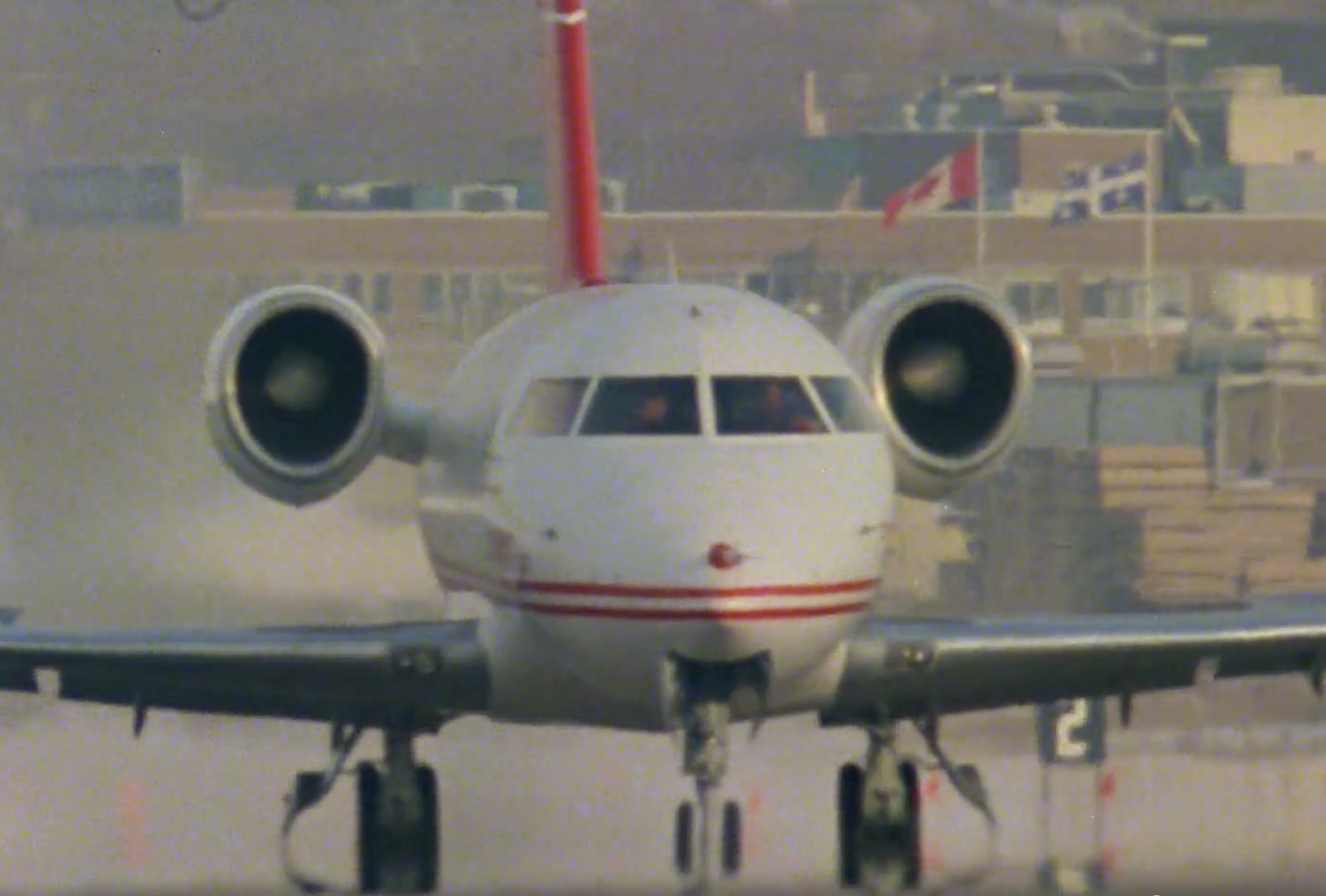 With the arrival of the 1980s, the innovative spirit and creativity of the men and women who work in Montréal's aerospace industry made a mark all over the world – and in space as well.

The world has seen the “Canadarm” at work on space shuttles. It was manufactured by Montréal-based MDA in 1981. The project was officially launched in 1974. Under the supervision of the National Research Council Canada (NRC), a group of companies composed of DSMA Atcon, as well as Spar Aerospace and CAE, began design of the Canadian arm. 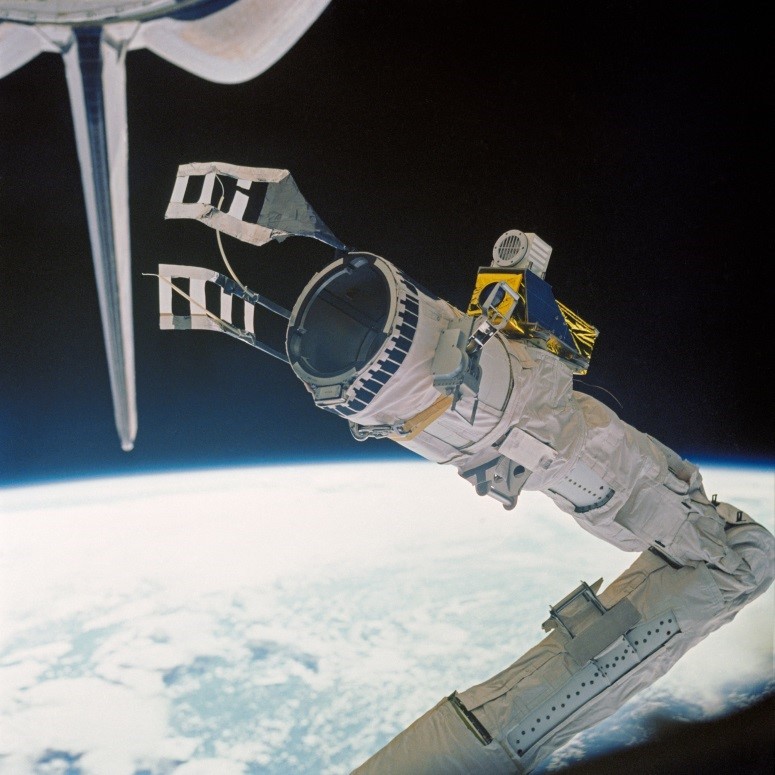 Delivered to NASA in April 1981, the Canadian arm was used for the first time on the second mission of the Columbia Space Shuttle (STS-2), which launched on November 13, 1981. All space shuttles have used the Canadarm at one time or another. The following year, Québec’s Marc Garneau became the first Canadian to travel in space aboard the Challenger Shuttle.

The Canadian Radarsat satellite was launched in 1995. Although it was designed to have a lifespan of 5 years, it would remain in operation until 2012. The following year, the Canadian Space Agency was founded and chose Saint-Hubert to set up its headquarters.

As it gained scale, Montréal’s aerospace cluster became increasingly attractive to foreign companies and Bell Flight opened its Mirabel plant in 1986. The plant has become an important link for the helicopter manufacturer and is currently involved in the development of the first air taxi. 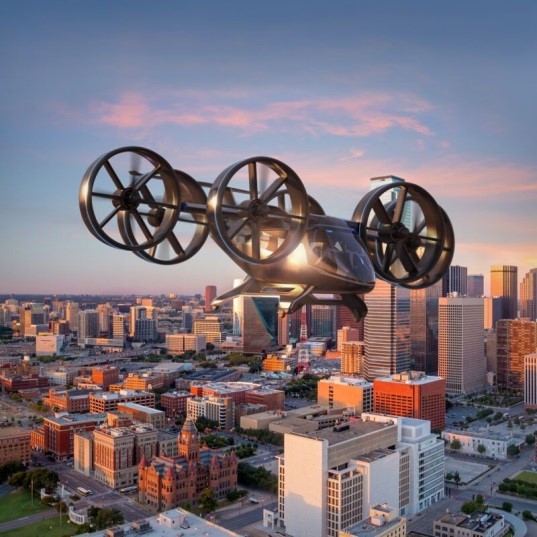 Bombardier: From Snowmobiles to the C Series

When Bombardier President and CEO Laurent Beaudoin signed the documents for the acquisition of Canadair from the Canadian government in the summer of 1986, he promised to develop the industry. Three years later, he kept his word as the CRJ aircraft program was officially launched in the fall of 1989.

Bombardier delivered the first CRJ to Lufthansa in 1992 and the 1,000th CRJ in 2003. The CRJ is the biggest commercial success of the Québec and Canadian aerospace industry, with nearly 1,950 deliveries. The CRJ and Challenger 600 have structured Québec’s aerospace industry and enabled it to grow significantly.

In the 1990s, Bombardier continued to expand its aerospace division, while in 1993, the turboprop version of the iconic CL215, the CL415, made its maiden flight. The first flight of the Global Express followed in 1996. It was Bombardier’s largest business aircraft and featured several innovations. Since 2007, annual deliveries of the Global Express have exceeded those of the Challenger 600. With the arrival of the 5500, 6500 and 7500 versions, the Global’s success could eclipse that of the Challenger 600. 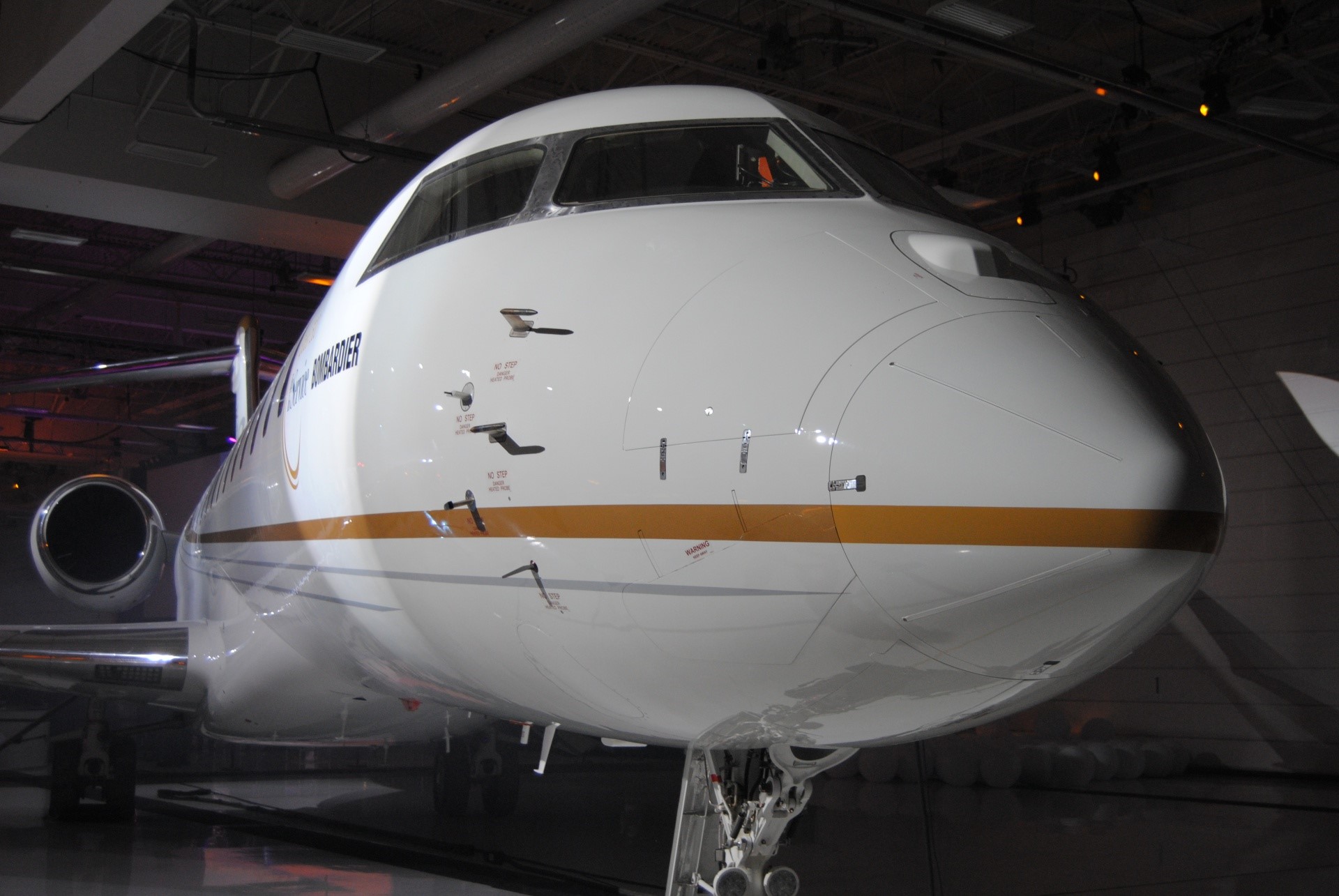 he New Millennium: The MRO Years

Until 2002, the maintenance, repair and overhaul sector was underdeveloped in Québec; the creation of Premier Aviation in Trois-Rivières was a game changer. The quality of its service enabled it to experience very strong growth. In 2017, it was Canada’s largest provider of repair and overhaul maintenance services. That year, it sold its Trois-Rivières, Que., and Windsor, Ont., facilities to AAR.

Bombardier Aerospace continued its ascent during the early 21st century with the delivery of the first Challenger 300 in 2003. In the years that followed, it gained the enviable reputation as the most reliable business aircraft. In 2018, it was the world’s best-selling business aircraft. In 2004, Bombardier officially launched the C Series and in 2008 won its first major order when Lufthansa placed a firm order for 30 aircraft. 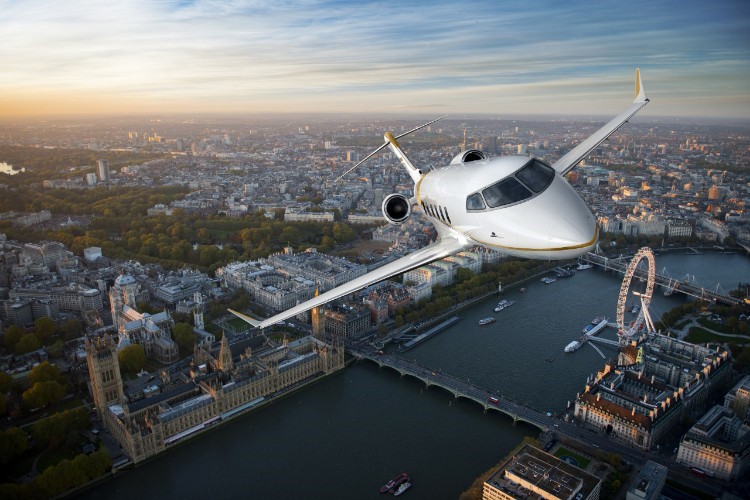 Québec’s space sector continued to grow with the Radarsat 2 satellite joining its predecessor in orbit in 2007. It is still in use.

2013 also saw the first flight of the C Series. Against all odds, the C Series entered service with SWISS in July 2016. Designed specifically for the 100- to 150-passenger aircraft market, the program featured many innovations. The transfer of control of the program to Airbus in July 2018 allowed Québec and Canada to become the fifth member of the Airbus consortium. Since then, the giant company has replenished the order book and breathed new life into the A220. In the 100- to 150-passenger category, the A220 offers operation cost savings of more than 20% compared to the previous aircraft generation. 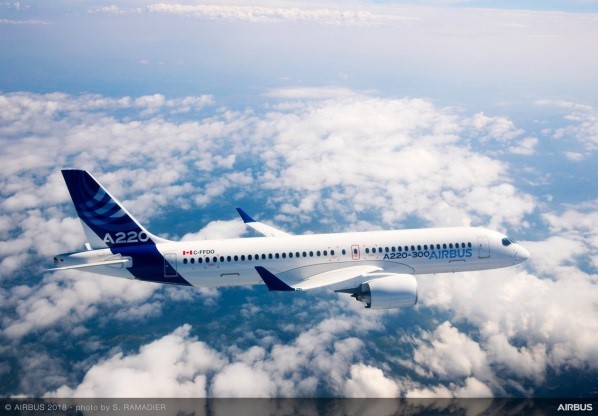 The RADARSAT Constellation Mission (RCM) is Canada's new generation of Earth observation satellites. Launched on June 12, 2019, the three identical satellites will work together to bring solutions to key challenges for Canadians.